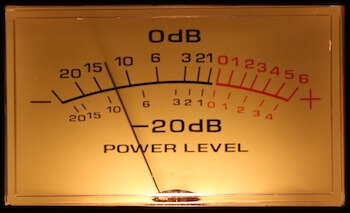 The term decibel was named after Alexander Graham Bell and is in fact based on 1/10th of a unit called a ‘bell’. The bell was originally used in telecommunications but nowadays the bell as a unit is not used and instead the term decibel is used to describe ratios of two numbers based on either 10 or 20 Logarithmic (depending on what is being compared).

The beauty of the dB is it allows you to work with large numbers without the maths becoming cumbersome. Unlike the unit of a ‘volt’ or a ‘watt’ or an ‘ohm’ a dB in itself means nothing until it has a point of reference, in other words for it to have meaning it needs context.

Here’s the most important thing to remember about the dB – there are two basic formulas depending on what you are measuring.

For power measurement (watts etc) you use:

For magnitude (voltage/current etc) measurement you use:

Value 2 is the reference, so could be ‘1 volt’ or ‘1 watt’ and Value 1 is the value of what you are comparing it to. Therefore the two values are nothing more than the two numbers describing the ratio to each other.

That is pretty much all there is to it!

Let’s take a typical example of an amplifier. If we measure the amount of voltage an amplifier is outputting when it is fed a 1KHz sine wave and find that to be 1 volt we can say that 1 volt is our reference value, in other words Value 2 in our calculation.

If we then change the input frequency to be say, 10KHz and now we find that the output of the amplifier is 0.5 volt we can say that:

Because dB is a base 10 logarithm, as opposed to natural to base E, we can do calculations of large numbers very easily. Let’s take the ratio of 1000:1 as an example.

We know from the handy list above that for magnitude that -20dB = 0.1, this means that +20dB must = 10. In other words +20dB is the same as saying something is 10 times something else. When calculating our 1000:1 ratio we just need to do some addition based on this value of 20dB. Simply shift the decimal place three times and we get:

Therefore, when something is 1000 times bigger than something else we can say it is +60dB.

This is of course also works the other way round too. If we want to describe that something is 1000 times smaller than something else (or 0.001) we can say it is -60dB.

If we take the amplifier as an example again but this time we want to calculate the total gain produced by a series of amplifiers we can do that much easier with dB’s. Lets say we have 3 amplifiers in series.

As we see above, one of the great thing about dB’s is that we can simply do addition instead of multiplication and still describe the signal gain.

If our input signal was 1 Volt we can now describe this signal gain as being 56dBV. This is because there are suffixes for dB to describe the reference. In this case ‘V’ is equal to 1Volt meaning anyone can understand what the reference of the ratio actually means. As described above saying ‘dB’ on its own, although it describes the ratio, it doesn’t describe what that ratio is referring to. This is why there are some commonly agreed symbols.

Some common suffixes include:

A real world example of this is my Soundcraft mixer (also applies to most mixers) as you see below it has an LED scale of dB values, which on their own would mean nothing, except it tells us that 0dB on the scale is a reference of +4dBu. 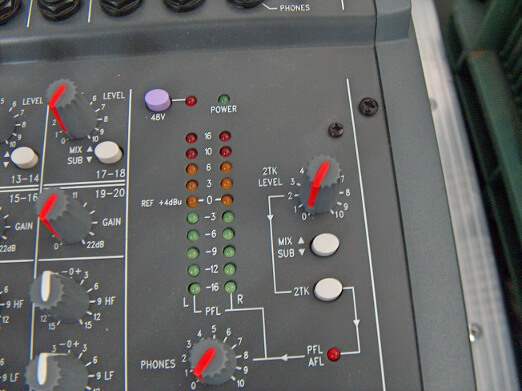 In audio, dBm generally refers to impedance of 600Ω, whereas in radio frequency it refers to 50Ω. It is therefore important, even when using common suffixes, to be sure of their meaning in context.

In acoustics, which is where most people are familiar with the use of dB, the reference value is the threshold of human hearing. The measurement of pressure (SPL) uses 20Log as it is a measure of magnitude and the measurement of power (e.g. dB SWL) would use 10Log. SPL uses the threshold of hearing (i.e. the reference value in our calculation) to be that of 20 micropascals. When measuring SPL quite often various weightings are used, such as dB(A) or dB(b) which are meant to reflect the human ear’s response at different frequencies. Although those notations are used the actual reading is still in dB SPL, in other words still uses pascals as the unit for the reference value.

The last important point to make is about log in general. If we take a look at an amplifier’s roll off characteristics, first in a linear graph and then in a log graph, we will see the benefits of using log. You will notice dB on the Y-axis and frequency along X. In case it’s not obvious this would not be an audio amplifier because of the frequency range but the same principle applies. 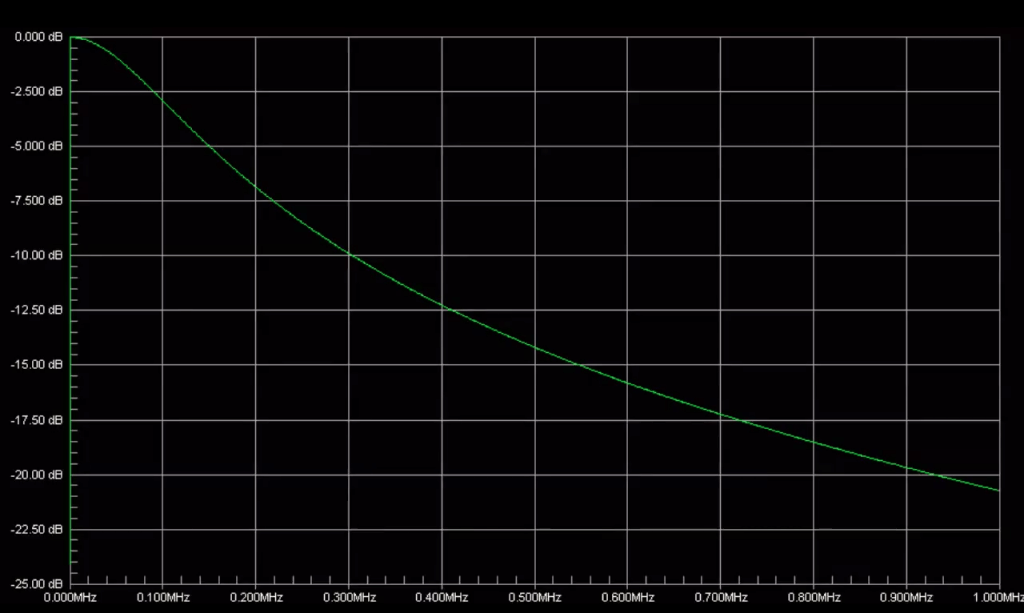 Notice that the roll off is impossible to read. The X axis is linear from 0-1MHz but this means that the narrow bandwidth at the beginning cannot be seen.

Now, instead of using a linear range for frequency we will use a log scale. This time each value for Hz is a ‘decade’ apart. A decade is a factor of 10 between each value – this is also known as an ‘order of magnitude’. 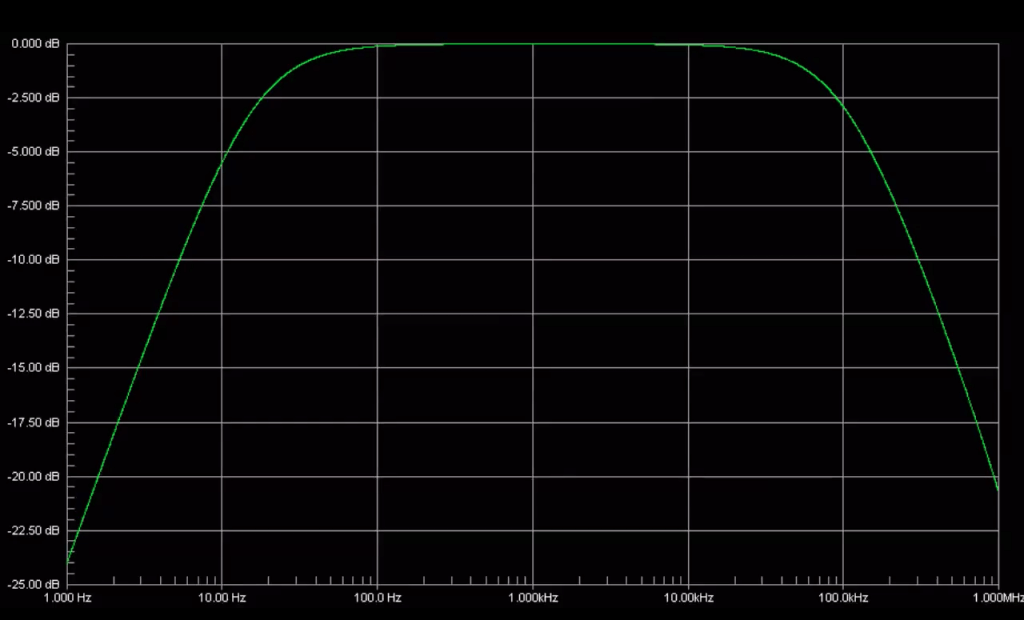 You can now see how much easier this is to read than before and the roll off is now obvious. The graph still shows 0-1MHz but this time, because each value along X is incrementing by a factor of 10, the narrow and wide bandwidths can be read. What we’re seeing here is a typical bell curve which is what almost any roll off graph will look like – providing it’s logarithmic!